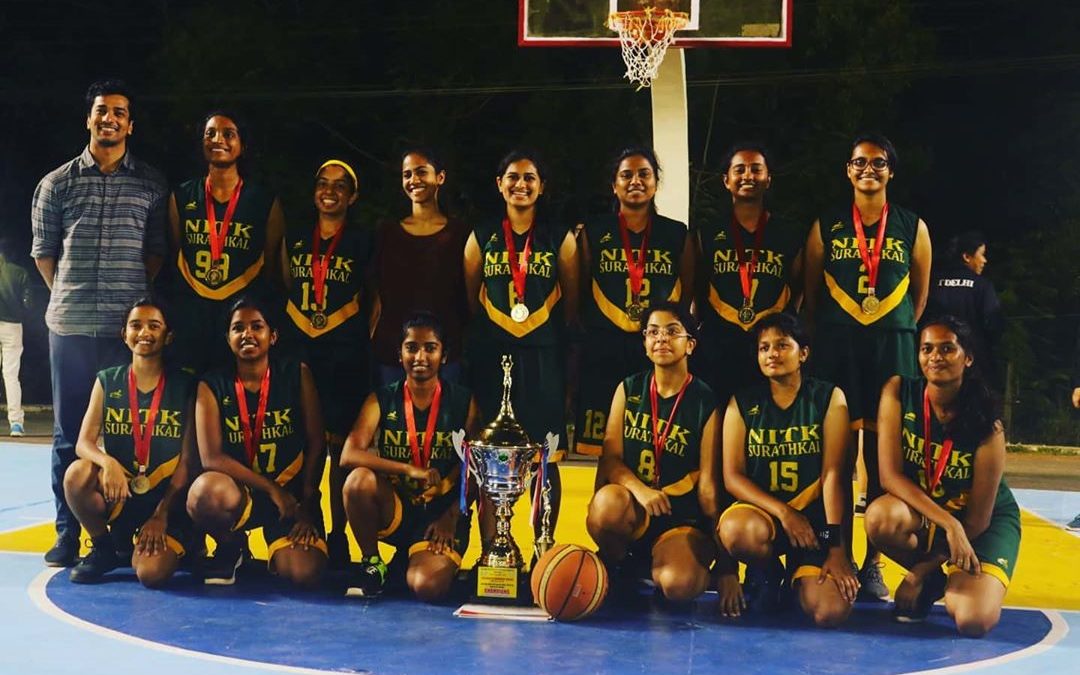 Amidst the deafening sounds of the cheering crowd and the air of nervous excitement, players from various parts of the country don their jerseys, all in the hopes of bringing glory to their college. After three days of intense battles between the different teams, only one champion emerges. Nevertheless, every player returns with a heart full of memories worth a lifetime.
The All India Inter NIT Sports Meet is the annual sporting fiesta that sees teams from the 31 NITs over the country compete against each other in different sporting events held across various NITs.
Our institute hosted the 2019 – ’20 All India Inter NIT tournaments for Basketball (Men and Women), Swimming (Men and Women) and Kabaddi (Men and Women) from 17th – 19th February 2020.
The event kicked off with the inaugural ceremony held at the NITK Main Ground on January 17, 2020. Sri. Jagadeesh Kumble, Asian Gold Medallist in Kabaddi was the Chief Guest and Prof. Ananthanarayana V. S. presided over the function.
Players from the various NITK sports teams recount their experiences and adventures from the event as they interact with Team Pulse.
Read on to view the Inter NIT tournaments through the eyes of the players.
Swimming (Men)

Atideepth Bharadwaj – Chemical 2nd Year
Refreshments after a tiring practise session are what all of us look forward to. To the sweet treats of milkshakes and chocolates. A couple of weeks before every Inter NIT, we get coupons for refreshments. This plays a good part in motivating us to practise. However, when the day arrives, when we’re standing on the starting blocks, we hear nothing but our own breath, waiting for the words “take your mark”. Then there is a pause before the coach blows the whistle signalling the start. That pause is when we feel scared, excited, and hopeful along with a mixture of 30 other feelings.
Once the race begins you don’t hear anything. The crowd shouting, people following, nothing. It’s just you, the water and your breathing. We go as fast as possible while trying to peek a look at our competitors, to see if they are ahead of us, next to us or behind us. That extra push we give ourselves when we realize that our rivals are next to us or ahead of us is what determines the outcome of the race. The best example I’ve seen of this is in this year’s Inter NIT. The men’s medley relay was one of the most exciting races. Four lengths of the pool covered by four individuals in different strokes. Starting with backstroke, then breaststroke, butterfly and then finally freestyle. NIT Trichy and we battled to the end, at first we got the lead in backstroke courtesy of Praveen Maiya, which I conceded to them in the breaststroke leg. However, we made it up in the butterfly leg, Aditya Satpute being the terrific swimmer he is and with that small lead Anushruta Tripathi was able to take us home. We literally won by just a couple of arms. The thrill of this victory knew no bounds. It was pure bliss.
Of course, the post Inter NIT entertainment of diving off the boards in the pool was amazing, but never did we bond with any other team as well as we did with NIT Trichy. We met them again at Manipal’s Revels and dined together. At the end of the day, making friends and enjoying other people’s company is what it all comes down to. Truly one of the best experiences I’ve ever had.

Meghna Savit – Computer Science 3rd Year
Inter NIT went really well this for the swim team this year, and the home field played to our advantage too. A lot of our competitions were really intense and fun to be a part of. Individually, all our members did really well, especially considering that our girls team was made up of mostly beginners. The individual events bought us medals in various strokes such as breast, butterfly and back. The relays we took part in, both medley and freestyle, were the cherry on the top, as we competed tooth and nail with our long standing arch rivals, NIT Trichy and actually did really well. All in all, the experience was great and we all learned a lot about the sport as well as about ourselves.

Sathvika.B.Mahesh – Civil. 2nd Year, Saumya Karri – Mechanical. 2nd Year
Feeling the swish of the ball when it goes clean through the hoop?
The All India Inter NIT Basketball tournament was held at NITK from Jan 17 to Jan 19. It was the biggest and the most awaited tournament for which all the teams had put in their best efforts. It was the epitome of skill and sportsman spirit. On the first day, most of the teams were seen practising on the court. No match was easy. The crowd witnessed the teams battle against each other for victory, pride and glory in one of the most heated events. While on the court we were opponents, outside all the teams were very friendly with each other. There were volunteers to help and cater to the needs of the teams and referees off and on the court at all times. NITK students coming in huge numbers to cheer for the home team greatly boosted our confidence during every match. In the 3 days of the tournament, we were extremely lucky to witness the immense talent and enthusiasm among all the teams.
We were up against NIT Calicut for the final match. Entering the court as the crowd applauded and chanted slogans praising the team was an incredible mixture of excitement and nervousness too since it was our home court. The whistle of the referee buzzed and the match began. It wasn’t an easy match. We put in our best efforts without fretting about what the result would turn out to be and it all paid off in the end.
We emerged as the Women’s Basketball Champions. Finally, after the prize distribution ceremony, all the teams celebrated by dancing together on court.
Basketball (Men)

Sohanraj R. – Information Tech. 1st year
Inter NIT was one of the most exciting experiences for us. Every year many teams from different NITs all over India train hard throughout the year to win this prestigious cup. It was very good exposure for us, playing against different kinds of teams with different methodologies.
Interacting with the other players was fun, listening to their previous year experiences and hearing the amount of respect they have for our previous generation teams was a proud moment for every one of us. Even though we were friends with most of the teams off the court, we were always rivals on the court. Giving our heart out for the game was necessary. We had home-court advantage and every one of us had no intention to disappoint the college or ourselves by playing a half-hearted game. While planning strategies for different teams or devising plays to score, the intention to win was pretty clear. We had the crowd’s support, cheering for us in every match.
We reached the quarters and lost by a difference of one point against NIT Jaipur. We played our best game that day and we all were satisfied by the way we played but a new hunger grew in us to win the trophy next year. We faced a lot of ups and downs during this tournament but we faced everything as a team.

Vislavath Suresh – Mechanical Final Year
Those were the days when zeal, dedication, excitement and confidence filled the soul of every player of the Kabaddi team. We had great practice sessions. We even stayed back at college during the holidays and worked hard. Every player stuck to the plan and made their time available for our Kabaddi practice. We all loved the way we put in our efforts to win the title and when the competition started we are confident enough to make our dreams come true. Our team was well equipped. When the competition was going on, we did feel a bit pressured being the home team. However, being a home team we got excellent support. Being the home team has its pros and cons.
At the end of the day, sportsmanship is the only thing that matters. True sportsmen are the ones who accept victory and defeat in the same way. The competition taught us a lot. We are not discouraged for not making it to the finals, we are proud of representing our college. We will continue to dream and work towards achieving the title of champions.

Vinaya J. – Mechanical 2nd Year
Women’s Kabaddi being part of Inter NIT competitions is the happiest thing for every female Kabaddi enthusiast. Students of NITK have been participating in the Inter NIT Women’s Kabaddi for the last two years. This year it was even more special since it was held at NITK. It felt good to be the home team. Every team member was proud and honoured to be a part of the game. All that we banked on was good practice. Our game strategy was that mind matters the most, even if you have an opponent with better physique. In front of the injuries you have in a game, the glory outshines. However, we did wish for was a safe game. Winning is the ultimate goal but participating and giving it our best shot is all that matters and that made our team emerge as the Second Runner up. 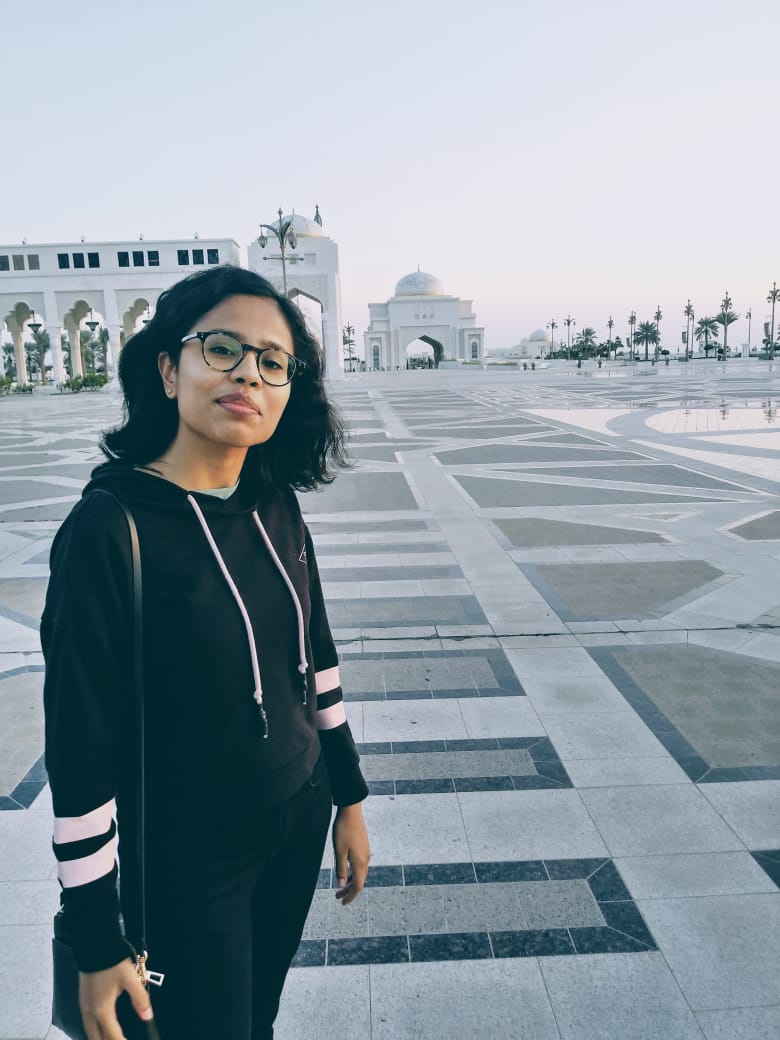 THE RETURN TO CAMPUS – PART 1