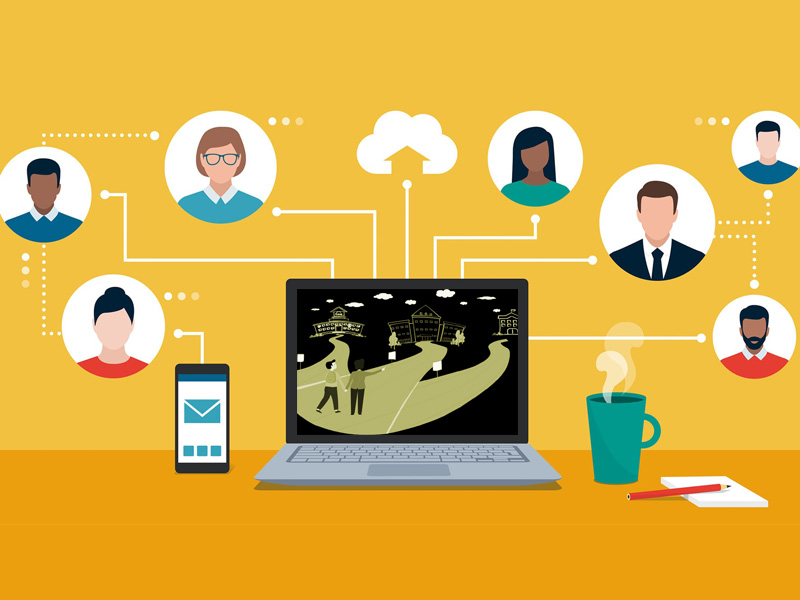 First day of college – new faces all around, ambitious hearts, excitement in the air, anticipation of the future and the determination to make an impeccable first impression. These were feelings most of us experienced as we stepped into NITK as freshmen, but for those beginning their college life during a worldwide pandemic, it’s a whole other ballgame. The new faces, now hide behind laptop screens, anticipation of the future is now replaced with the anticipation of being called back to college and the determination to make a good first impression remains the same, no one wants to make a gaffe on a call. The college has done its best to adapt to the virtual semester, training the professors to utilise the pre-existing online platforms to their maximum efficiency and to ensure that the quality of education is not compromised to the maximum possible extent. In fact, the current system which involves uploading recorded lectures is to allow students to access these lectures as per their convenience, since live lectures can cause problems for those with connectivity issues. The college was also instrumental in providing licenses to e-learning platforms such as Coursera and EdX, which give students the chance to pursue courses outside their curriculum. Despite their best efforts, the virtual setting invariably provides a lack of communication and interaction. Pulse spoke to the class representatives of the first year batch, to get an overview of the issues being faced as they traverse the online semester.

While there was a certain ease in completing admission procedures from the comfort of one’s home, online communication proved to be a hassle. Students say the MIS officers were quick and prompt with their replies, which made it easier to navigate the online student portal, IRIS NITK. Post admission, due to the absence of interaction in person, with professors, peers and seniors alike, the first years had to guide themselves through their curriculum and adapt immediately to online platforms such as moodle.

Online Classes – Are they really effective?

The online mode of teaching includes uploaded lectures and live discussions mediated on teams, for half an hour as per the timetable. Most students do not find the online mode of teaching effective. Apart from technical issues such as lack of internet connectivity, textbooks, a suitable environment to study in, students find it hard to concentrate while staring at a laptop screen for hours together. Amidst the confusion of adapting to a virtual environment, most students were unaware of platforms such as moodle and BigBlueButton, resorting instead to Youtube lectures, apart from the live interactions with their professors. While theoretical courses are manageable, courses like engineering graphics are extremely difficult to comprehend through an online lecture. Engineering mathematics, a course most of us struggle with, is also a challenge. With the 30 minutes allotted for discussions, students barely get through 3-4 problems in a class. The rearranged course plan carries a higher weightage for assignments and tests, leading to a very hectic schedule for the freshers’.

Communication with professors and peers alike

Students feel that communicating with their professors is not a major issue as most of them can be contacted via email, MS Teams or even on Whatsapp. While a few professors take time to reply, a few students are also concerned about disturbing their professors during non-office hours. The short duration of the online classes isn’t very feasible to discuss all doubts, especially those not directly related to the subject. When asked about communication with their peers, a few answered that communication was mostly limited to class groups, regarding assignments and other coursework, while a few mentioned that teaming up for club events helped them interact with their peers on a non-professional basis. A few classes even hold casual meets to interact with each other, but given the strength of the class, these meets can get chaotic. Despite all their interactions, the freshers still feel the lack of direct communication.

Post the induction of the first years, there has been a significant rise in the number of events held by clubs, both exclusive and non-exclusive, each trying to connect with and create an impression on the freshers. While these events offer a respite from the monotonous classes, first years often find it overwhelming, given the sheer number of student clubs and events. Most freshers’ find these events helpful, both to communicate with their batch mates and with their seniors. Seniors offer them advice on academics and campus life along with imparting knowledge in case of KEPs or Expert Talks. One of the issues highlighted was the sea of spam that makes its way to the freshers. One is often unable to find a particular event of interest as it gets lost among the many others taking place simultaneously. Despite the clubs’ best efforts, online events still have some gaps that cannot be filled. They have however managed to instill interest in the freshers’ minds as many of them look forward to the upcoming recruitments.

The struggles of being a class representative in uncharted territory

While being a class representative brings with it the opportunity to network, given the current situation, the CRs often find themselves being spammed with messages from each individual. While that is one extreme, the other extreme is the lack of response on the class group, making it hard for CRs to make important decisions regarding the class. A few students haven’t adapted well to the transition to online mode, and in these cases it is hard to contact them. A few have issues with technology or connectivity, which the CR is then required to deal with. Another issue faced by CRs is the concern about online quizzes and exams. While a few students question the authenticity of these exams, a few remain content with it, and the CR is left in a dilemma of addressing either side.

While most students hope that the next semester will be offline,Pulse asked them what changes they’d like to see, in case the online format continued. Many students insisted that lectures be taken on a blackboard, either live or recorded, instead of platforms like BigBlueButton which aren’t very effective. They would also appreciate if any practical courses like engineering drawing were shifted to the next semester, to be done offline. Routine interactions with both students and professors is necessary to try and bridge the gap in online learning, along with effective communication between the administration and the students.
The online semester is no one’s first choice, but the current circumstances leave us no choice. Effective communication is key to breezing through a virtual semester. Freshers’ need more interaction with their peers, their seniors and their professors, to discover the many opportunities that college can offer them, both academically and non-academically. An online semester cannot measure up to the efficiency and ease of an offline semester, but in the meanwhile, communicating and addressing the issues may help in elevating the online semester ever so slightly.

Work for Pulse for an Edition! (Open to First Years only)

Fantastic Hackathons and Where to find them in NITK

Institution of Engineering and Technology, NITK, 2 years ago 4 min read