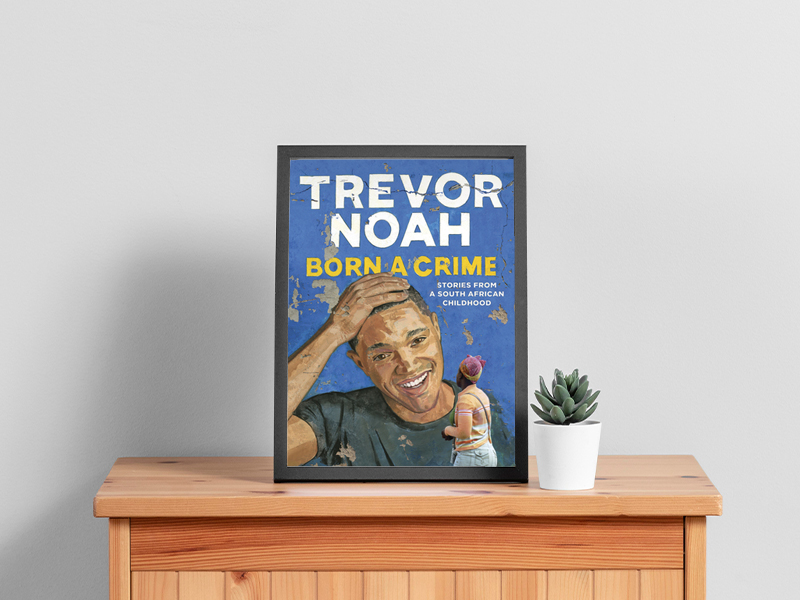 If you are in a mood to do a different kind of reading, this is definitely the go-to book. This is a curious case of something completely different from other books in this genre because Trevor Noah has lived a life that is radically different from most people. The title of the book “Born a Crime” says, Trevor was born to a white Swiss-German father and a African black Xhosa mother in the Apartheid plagued South Africa and hence, his birth and existence itself is evidence of a serious crime. So the book is filled with stories surrounding his childhood, his mother and growing up in post-apartheid South Africa.

He also talks about his experiences with his white and black families, his black and white majority schools, his white and black friends and ultimately, his own black and white halves. In an insightful chapter, he describes how he used language to bridge the gap between races and cultures. Today, he can speak (and even perform stand-up comedy in six different languages. In his words, “Language, even more than color, defines who you are to people. When you make the effort to speak someone else’s language, […]  you are saying to them, ‘I understand that you have a culture and identity that exists beyond me. I see you as a human being’ ”.

In multiple interviews, Trevor has mentioned that this book is a note of gratitude to his mother. It is evident in the stories contained in the book that she is the MVP in his life. He talked about how his mother raised him in pre and post Apartheid world, sometimes fighting and sometimes tricking the system in order to raise a “coloured” kid in a racially segregated country, like getting his son into good schools and protect him from the police. In one particular incident, he recounts how she had to yeet him and his brother out of a moving bus and jumped out herself to save themselves from attackers in a bus ride.

The book is also one of the funniest books of the genre. This is not a surprise – the host of the prestigious Daily Show and the successor of Jon Stewart has to be a comedic genius. To highlight one particular example, he recalls an episode in which his step-dad shot his mom and almost killed her. He manages to narrate the story of a tearful young man who had to handle a deep shock that results from such an incident, while also peppering it with hilarious punchlines and jokes.

The brilliance of the book lies in 2 important factors:

1. Trevor is a storyteller. I’ve seen his stand-up and show segments and he infuses them with amazing anecdotes. This book is filled with anecdotes from a life that is extraordinarily lived. This man rose from being thrown out of a moving bus at 5 years of age by his own mother to save his life, all the way to becoming one of the most beloved comedians in the world. That is a story worth reading.

2. Each chapter opens with an incident or current affair that the world is facing, like racism, female empowerment, etc. He then narrates a chapter of his life that relates to something happening in today’s world. This depicts how he thinks about ongoing political and social news and that his understanding of these things stems from his upbringing that is uniquely his own.

So the biggest strength of this book is its ability to handle some of the most difficult aspects of his childhood, including racism, acute poverty and domestic abuse with his signature comedic undertone. This book is a very easy read, but you will find yourself pausing quite often, either to take in the bizarre stories, ponder about the sociocultural environment in apartheid SA, or to catch a breath after laughing hard. Have I mentioned how incredibly funny this book is? Give it a shot. It is smart, it is funny and most importantly, it is awe-inspiring. I’ll end it with my favourite extract from the book:

“The hood made me realise that crime succeeds because crime does the one thing the government doesn’t do: crime cares. Crime is grassroots. Crime looks for the young kids who need support and a lifting hand. Crime offers internship programmes and part-time jobs and opportunities for advancement. Crime gets involved in the community. Crime doesn’t discriminate.”

TheraView: Tune In To Therapy!

A Home Away from Home