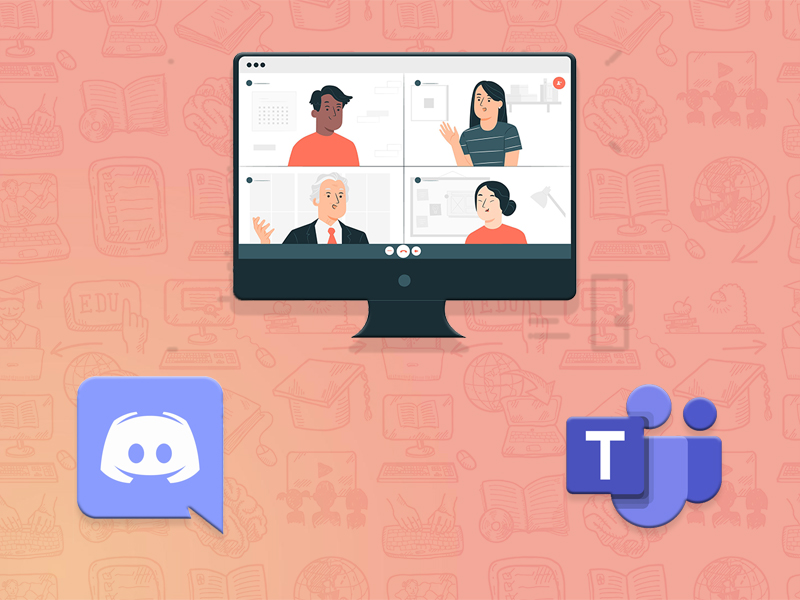 In this despondent world plagued by the malevolent blight, cries for help echo through the desolate landscape, unheard by any living soul. But perhaps in this very state of affairs, can the light of the digital world coruscate through the sombre scenery. An alarming portion of our day now revolves around digital communication platforms. An abnormally titanic user base, either willingly or unwillingly, now uses Microsoft Teams, Discord, Google Meet, and Zoom every single day. Let us see how two of the biggest platforms – Discord and Teams, weigh up against each other.

The pearly gates of Discord have welcomed the modern gamer since 2015, and it has swiftly evolved into a haven for a wide spectrum of audiences. It has branched out to include communities from all over the internet, ranging from music artists, education, and even technology. Featuring a digital footfall of over 140 million active monthly users, Discord is a platform of consummate quality, eclectic features, and uncompromising support.

Discord allows direct messaging between two users, but the core functionality of this app is the server system. For the uninitiated, a server is essentially the same as a WhatsApp group, but orders of magnitude more swanky. Each server is equipped with assorted channels, with each channel coming under one of two classes – voice or text. Each channel is like a mini group, having its own topic and rules. Text channels, as the name suggests, are channels used for texting. Voice channels are nifty little doodads.

Despite the label of “voice”, these channels can be used in a myriad of scenarios. From flaunting your ravishing visage in video calls or showing your squad that 1v5 clutch 360° no scope kill by streaming your game/screen, these voice channels are very versatile. A group of channels can be grouped under a category as well. For instance, take a gander at this
image –

This is a server for the fans of Manchester City Football Club, based in the UK. For first-timers, this might seem unnecessarily convoluted. But in time, people grow fond of this organized, meticulous system. On the very left, you see a litany of channels, with each channel being named after its matter of concern. Under the category of “Colin Bell Stand”, there are channels for discussing player transfers, the ongoing UEFA European Championship (or Euros, for short), tactics, and many more. On the extreme right, you see the users on this text channel. In most servers, users are also grouped into categories, or in Discord lingo – “Roles”. For instance, one of the moderators of this server is James, there are two “Helpers” currently online and many more under the role of “Royal Family of Abu Dhabi”.

Discord is an exceptionally user-oriented platform, and there are several cogent arguments for the same. Up to 50 customized emojis can be added to standard servers. One feature that is sure to pique your attention is the bot feature. Bots are programs that act as users and can be added to servers to spice up your group. The range of functionality of Discord bots is utterly colossal. From bots that play music of your choosing in voice channels, supply you with your hourly dose of memes, and even host text-based games, these ingenious creations are a must-have in each server.

For instance –
This is a bot programmed by this user (Viper) independently. On typing the command “!store” on the channel that the bot is present in, it fetches all the offers present on in-game purchasable items in the game Valorant. In the footsteps of our benevolent Lord and Saviour Tim Apple, who graciously bestows upon us the iPhone and the iPhone Pro Max Super Duper Ultra Mega every year, Discord also has a Pro Max Super Duper Ultra Mega variant, known as Discord Nitro. From HD video streaming, bigger upload sizes, animated emojis, and boosting server privileges among others, Discord Nitro is a sublime experience over the already polished base variant. At the time of writing, Discord Nitro is free on the Epic Games Store for a trial period of 3 months!

The brainchild of one of the most prominent companies in the world, Microsoft Teams, is a platform used by professional organizations around the globe as a daily driver for communication. It goes without saying that it is a sophisticated, refined, and expedient application for professionals and students alike. The poor souls at NITK are more than aware of the functionality of this damned contraption, jerking them awake in the wee hours of the morning for what seems like a decade now. So here are some of the more esoteric features that might alleviate the symptoms of the remorseless malady, known as the 8 AM class.
The search bar in Teams doubles as a command line! Type in one of the recognized commands to take a shortcut to some of the most frequent tasks. For instance – “/files” to view your recent files, “/unread” to see new activity, and “/call” to make a call.

Need an immediate reply? Click the exclamation point below the message box before you press send to mark a message as important. The recipient will get notifications every two minutes for the next 20 minutes or until it’s read!
Once a meeting has been recorded and uploaded to Microsoft Stream, you can also generate a meeting transcript using native features of Stream.
So, how do these platforms from a billion-dollar company and a trillion-dollar company stack up against each other? The essential functionalities, such as chats, meets and file sharing are shared, but the nuances in their execution designate their target demographic quite distinctly.

File-Sharing – Microsoft Teams makes it easy to share files through OneDrive, Microsoft’s cloud storage service, or by uploading files directly to Teams. Up to 1 TB of files can be stored per organization and 25 TB per group, with a single file upload limit of 15 GB.
Discord also supports file uploads, but with much stricter limits. Discord’s single file upload limit is only 8 MB, and 50 MB on Discord Nitro.

Cost – Both Discord and Microsoft Teams offer free versions that include all of the basic features of the platform. In particular, Discord’s free version is fully functional and the paid Nitro version is only necessary if you need higher-quality video and voice channels or higher file upload limits.
Discord’s paid Nitro plan is $99.99/year (or $9.99/month) for a single user. Microsoft Teams’ free plan includes unlimited text communication, audio and video calling, screen sharing, 10 GB of file sharing, and 250+ integrations. Paid plans come with Microsoft 365, which includes all Microsoft Office products like Word, OneNote, and Outlook. They include advanced features like video conferencing meetings, 1 TB of file storage, more file storage and sharing with OneDrive, SSO and 2FA security, and admin management tools. Paid plans start at $5/user/month.

Integrations – Discord has few native integrations, though it can be connected to other apps through Zapier. Microsoft Teams includes 28 native apps available for integration on its platform with tools like Wikipedia, OneNote, Azure, and Office 365. Through the MS Teams website, an additional 500+ apps such as Salesforce and Google Analytics can be integrated.
So, which platform should be your group’s weapon of choice? Teams is a sterling compliment for the workflow of a technical club. With large file upload limits, integration with frequently used native apps such as Whiteboard, Office 365, meet scheduling with a shared calendar, task assignment/tracking, and event planning/management, it is well suited for groups with the need of “business” features.

If you need a social platform, especially when dealing with a younger demographic, Discord is in a league of its own. A single server can have up to a colossal 500,000 members (If more than 25,000 are online simultaneously, the owner must contact Discord support to avoid connection errors), the maximum number of categories for a server is 50 and the maximum number of channels is 500. Discord befits the needs of casual groups for messaging (and gaming) and large open-source projects.

With large limits for voice/video chat, integration with gaming platforms such as Steam, and the exceptional versatility of bots, Discord is perfect for social circles.

Family – This is not a Sales Pitch