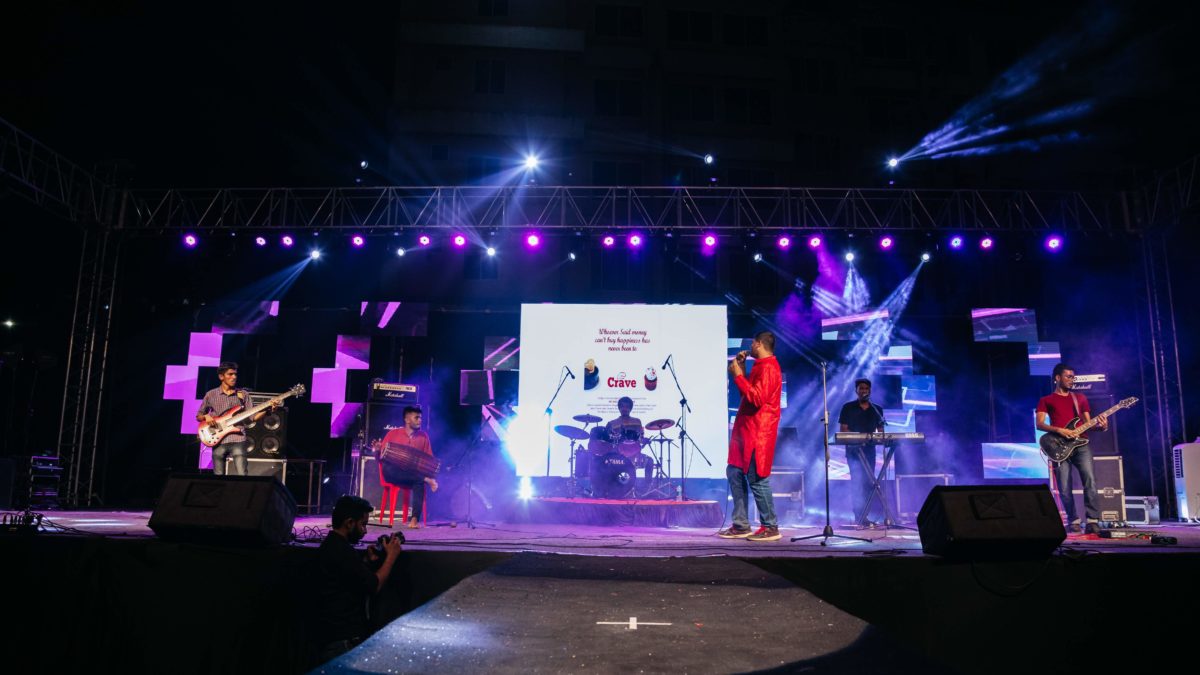 Churmuri Chai is a progressive carnatic fusion rock band based in NITK. Taking breaths away at reputed fests, from Saarang at IITM to our very own Incident, Churmuri Chai has been churning out symphonies of the highest calibre and is the pride of the NITK Music Club. The original lineup consisted of Vivin Peris on the drums, Bhargav SS on vocals, Anand Pathak on the guitar, Rajamani Ayyer on the keyboard, Rahul Thottipal (alumnus) on bass, Amogha Udupa (alumnus) as flautist, Samarth Katiyar as guitarist and Sriram A (alumnus) on percussion (mridangam, afro drums and kahoon). Prasad Fidelis D’sa is the current bassist and Nishchith P Sriram is on percussion. We sat down with the band for an interview to get a deeper perspective into their dynamics. In this feature, we will be taking a look at how the band came together and how they work together to brew the most exquisite chai.

The band came together sometime towards the end of odd sem 2017. It was started by Vivin, Bhargav, and Anand. The standard practice at the NITK Music Club around this time was to form multiple bands amongst the members themselves to compete in Saarang at IITM, which takes place in January. Usually these groups disband after the event is done, but this one just happened to stick together. This is quite an impressive feat, considering the fact that it has been almost three years now! Since the band did not have any video submission to upload for Eastern Rock, they decided to go for Eastern Acoustics. To their pleasant surprise, they killed it on stage and clinched second place!

Prasad – “The quirkiness really makes us stand out!”

Rajamani – “We narrate many stories to people who have asked us, but the truth is that there was no grand inspiration or intriguing story behind this amusing name. It was the night before the event at IITM, and we were busy brainstorming band names. For sometime, we could only come up with mundane raaga names. Then someone suggested naming it after the band Masala Coffee. Bhargav came up with Churmuri Chai, thinking of a snack. Some of us disagreed, but it turned out to be a lucky one and we changed our minds after winning the competition.”

Rahul – “That would be Agam. We played a lot of their music when we started coming together as a group, and tried to emulate their genre when we performed. But individually, we all have various tastes in music, including classical, alternative rock, metal, etc”

Individually, they have dipped their feet in several genres of music. The band appreciates Indian and western classical, alternative rock, metal and they listen to Masala Coffee, Dream Theater, Metallica and AR Rahman. But talking about the band as a whole, their biggest influences are Agam, Thaikkudam Bridge, and Avial. Their greatest inspiration is the band Agam, whose members are techies playing carnatic progressive fusion, and the band relates to them a lot.

Vivin – “We had a blast when Harish Sivaramakrishnan, the lead vocalist for Agam, gave a TEDx talk at NITK. We got to spend about an hour with him and it was an enriching experience.”

Rajamani – “In all competitions and gigs, we play Humma for soundcheck and Rudra, Malhar Jam and our original composition for our main setlist. Rudra has a very energetic vibe to it. It is intensive on instrumentals and headbanging is inevitable. Malhar Jam showcases our progressive musicianship. The original composition is a fusion of heavy metal, eastern and death metal.”

Prasad – “As a bass player, Malhar Jam is a very enjoyable song as the complex rhythm structures in these songs make it really fun to play.”

Prasad – “Original compositions are where a band establishes themselves and their style. It is the only thing that separates us from the bands we are covering. As you rightly said, they become the heart and soul of the band. Our songwriting process begins with our lead singer Bhargav, who composes the lyrical parts. Then it’s all a matter of brainstorming and keeping the ideas that sound good to us.”

Vivin – “We just jam and the musical chemistry plays in, churning out compositions, with everyone adding their own flair. Then we fuse it with lyrics from old folk songs.”

Rajamani – “Our very first original composition was done in less than 5 days for our competition at Incident 2018. The process was very frustrating. We were unable to take inputs from every member of the band because we were very strapped for time. Despite that, we are very proud to say that every single musician contributed to the composition of the song. All we had was one guitar riff, and the Herculean task we faced was to build it into an entire song. We agreed upon the basic song structure and the intro. Then we introduced a keyboard solo, a guitar solo and the ending as well. As time passed, we polished our composition even further. The guitar riff was made more catchy and the intro was transformed into a heavy buildup. The guitar solo was converted into a death metal breakdown and during a studio session, guitar harmonies were introduced.”

Rahul – “The best part of being in a band is the motivation that drives you to pursue learning music. Even if you feel lazy to practice, you know there are other people counting on you, so you end up pushing yourself to learn. In a way that’s also the worst part, because it’s a lot of pressure when you know the whole group depends on you. Sometimes we’ll end up disappointing each other, but ultimately it is a very rewarding experience.”

Vivin – “Coming to the best parts, I would say performing in front of thousands of people in the crowd and watching them cheer and enjoy our music. The worst part would be the toll it takes on your time. Managing academics, club activities and gigs before exams is no joke.“

Rajamani – “Some of us are not from an eastern music background, but we have learnt a lot of new scales from our vocalist, various techniques from the guitarist and bassist and further honed our skills. Performing in front of thousands of people, and watching them cheer is a very gratifying experience. In a band as big as ours, there can be a lot of creative differences and clashing of egos, ultimately leading to unnecessary fights and unproductive rehearsals. We have also had several phases where some of us were caught up in such issues.”

Sriram – “The fun we have during our hour long random jams is unparalleled to any. We are just in the moment, living with the music.”

Prasad – “You get to meet a lot of talented people, exchange ideas, and gain valuable experience, which all lead to growth as a musician. But the time limit in competitions is a major hurdle. This gives a very narrow window for sound check and setup, and at times it doesn’t do justice to the efforts put into practice.”

To avoid any hassle, every jam session is planned in advance. If a new song is scheduled, each member learns their part before arriving and they try to coordinate during the jam. They help each other out during difficult sections of a song and slowly gain confidence. For songs that they are familiar with, they chalk out the order and try to further achieve tightness. As their music includes odd timed rhythms, syncing becomes imperative and a lot of attention is given to it during practice.

Rahul – “Although we didn’t win a prize, Revels 2018 in MIT was one of our best performances. The crowd support there was incredible.”

Rajamani – “It is memorable not just because of how amazing the show was, but also because that was with our original lineup and it strikes an emotional chord within us. Adrenaline 2019, Adrenaline 2020 at FMMC and Incredia 2020 at NITTE are also some of our finest gigs.”

Sriram – “The first time we performed as Churmuri Chai at Saarang, IITM was also sensational as we placed 2nd at such a competitive event.“

Vivin – “Unfortunately we have had our share of abominable gigs too. Our worst show was Incredia 2018 at NITTE. We couldn’t hear each other at all.”

Sriram – “At NITTE, we totally bombed our original composition and passed it off as a sound check, to our embarrassment. We still try to forget about how bad we played that evening.”

Prasad – “We were cut short at Revels 2020 by the organisers and couldn’t conclude satisfactorily.“

Rahul – “We don’t really have a method to deal with nerves, except to say to ourselves that we are not doing any of this to win prizes, but only because we enjoy doing it.”

Samarth – “Coming together backstage, and reminding ourselves why we make music with each other is a good routine. Having said that, we always enter a competition with the intention to win.”

Prasad – “Competitions naturally come with the fear of not messing up on stage, that too in front of judges who are accomplished musicians. We find being slightly nervous is beneficial because it keeps you alert on stage.”

Rajamani – “I have never been nervous. Performing our current setlist in front of a huge crowd, along with lighting and live sounds ignites a fuel in me. I always have the time of my life, where I forget all my problems and jump, headbang and scream with my band. I am always excited before performing, because I know I am going to experience a rush of adrenaline.”

Vivin – “It is quite an indescribable feeling. Imagine doing something you love, after preparing for days and days. When the time finally comes, you just live in the moment and hear people cheering for you.”

Sriram – “You feel a surge of adrenaline, just like you get while bungee jumping.“

Samarth – “You see the faces of everyone in the audience and know they’re experiencing your music in their own perspective. It is communicating with the audience, not using words, but the transcendental medium of self expression, our music. Connection and conversation don’t get much deeper than this.”

Rahul – “Some of us are reserved and shy. The experience of performing live has also helped us lose our inhibitions when it comes to matters like addressing crowds or giving presentations.Just knowing the fact that you’re doing something you enjoy doing and reaching a lot of people in the process itself is a great feeling.”

Rajamani – “We take it as a mission. If someone who isn’t musically inclined likes the stuff we do, then that’s mission accomplished.”

The band would like to use this opportunity to honour their friend, Anand Pathak (Matta, as they called him). He was a talented guitarist, composer and one of the co-founders of the band who had a special knack for conjuring up mellifluous melodies. He was the jewel in their crown and he tragically passed away in 2018, after losing a battle with depression. They never considered a replacement for his position in the band. All their performances have been a loving tribute to him.

Family - This is not a Sales Pitch