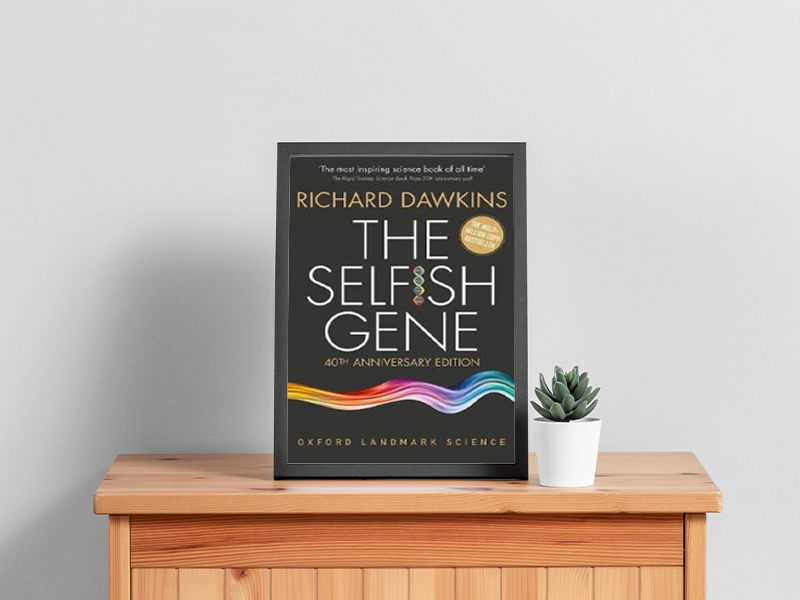 “The Gene is immortal”, said Richard Dawkins in an interview with the Royal Institution, when asked about the inspiration behind his brainchild that is “The Selfish Gene”. I had stumbled upon the video of this interview while surfing YouTube one night and although I’m no Biology major, the content of Dawkins’ answer instantly grabbed my attention. He goes on to further explain how some genes show similarity to those that existed hundreds of years ago, and this intrinsic fact is in itself enough to understand the importance of preserving the good genes, so as to advance a species.

Although usually, this short interview would’ve been enough to convince me to pick the book up, I kept forestalling it, given the extent of biology that seemed to embellish the book, however, a chance encounter on a family WhatsApp group, wherein an “unhealthy” discussion of politics led one of my uncles to quote this book and explain how in a world full of hawks and doves, it’s neither the hawk nor the dove that survives eternally, but the majority’s perception of the goodness of being a hawk or dove circumstantially that dictates who lives on. Now I’m immediately intrigued and I place an order for the book immediately.

Very few books have the power of really blowing your mind away, and you’d think what’s so different about a book written in the ‘70s based on a study as technical as Biology, but just like most, I would be proved wrong. The Selfish Gene is anything but a comforting read, I mean who really wants to be taught that the sum total of all actions that have led humanity to advance this far has been a zero-sum of selfish assertive drives where there’s always a clear winner and loser, there’s always the better gene and the worse gene (yes, I’m looking at you Alabama), and there’s always those who will fight the belief that an altruistic model never really is altruistic if you look closely. It reminds me of the quote from “Now you see me”, “The closer you look, the lesser you see”.

The foundation of the Selfish Gene is the fact that a group/species can survive only if individuals behave in their genetic self-interest and ensure that their genes are passed on. He explains how Natural Selection favours some genes more than others not because of their intrinsic nature, but by virtue of the consequences, which are dictated by choices, choices that would often be frowned upon usually. This reminds me of another conversation my friends and I had quite a while back on the topic of “Why empathy doesn’t dictate the answer to “why do we kill some animals over the other “”. The evolutionary development of some species to adapt to civilizations and humanity, and making them useful in whatever way possible is the reason for their advancement as a species. It elucidates the result of their inherent genetic constitution to be self-driven to find purpose and meaning in the lives of human beings.

Dawkins breaks down the Gene as the fundamental unit by dissecting a civilization into groups of people (family), which further stems from multiple individuals, and each individual is a direct result of their “unique” genetic constitution. This very understanding could be elemental in our understanding of the fact that the gene is king. If you want to advance something, start at the grassroots. We often misinterpret selfish acts as acts of altruism, kind of how Joey from F.R.I.E.N.D.S says “There are no unselfish good deeds”, and while the funny naive Joey has often been a subject of ridicule, this one quote does stand out. Take the example of worker bees. This variant of bees are responsible for defending the hive and doing the grunt of manual work, and that being said, every time they sting an intruder, they themselves die. While many have interpreted this as an act of unselfish behaviour, defending the fort (probably playing the soundtrack from “Braveheart” in the background), there is genetic causation as to why the worker bees are put to this task. The worker bees are inherently sterile, hence we see that taking one for the team is for the sheer purpose of advancing their species by carrying out their duties as the protector. A similar example, seen very commonly in wildlife, wherein the mother would sacrifice herself to save her cubs, not as an act of heroism, but because even animals are genetically coded to first look towards the advancement of their species. That’s what got them this far. As a member of the species, incapable of reproduction, it only makes sense to preserve her progeny who can go on to advance their species and carry on the genes.

The Selfish Gene, although built on this foundation of “Anti-Altruism”, does dive deep into many niche examples and instances wherein the author illustrates the existence of the “Selfish Gene”, wherein the behaviour that dictated the action can be analyzed and understood as one which is motivated by selfish interests and can be justified as consequences that will eventually progress that species. However, there is a lot of room for misinterpretation. While on one hand we are handed these harsh truths, Dawkins does make it clear that he doesn’t suggest how we humans “ought” to behave, but rather he’s just a medium by which we can understand the factual relevance of how a species evolves and progresses. Although I’m more of a Star Wars man, Star Trek’s famous quote “The needs of the many outweigh the needs of the few, or the one” does come to mind, and that is the crux idea behind the book. We find ourselves muddled with information from all sides, but “The Selfish Gene” is a very lucid interpretation of genetic evolution which can be understood by anyone and everyone, and reading it has indeed provided new perspectives which are definitely worth finding.

BNR Vega: Gunning for the Top