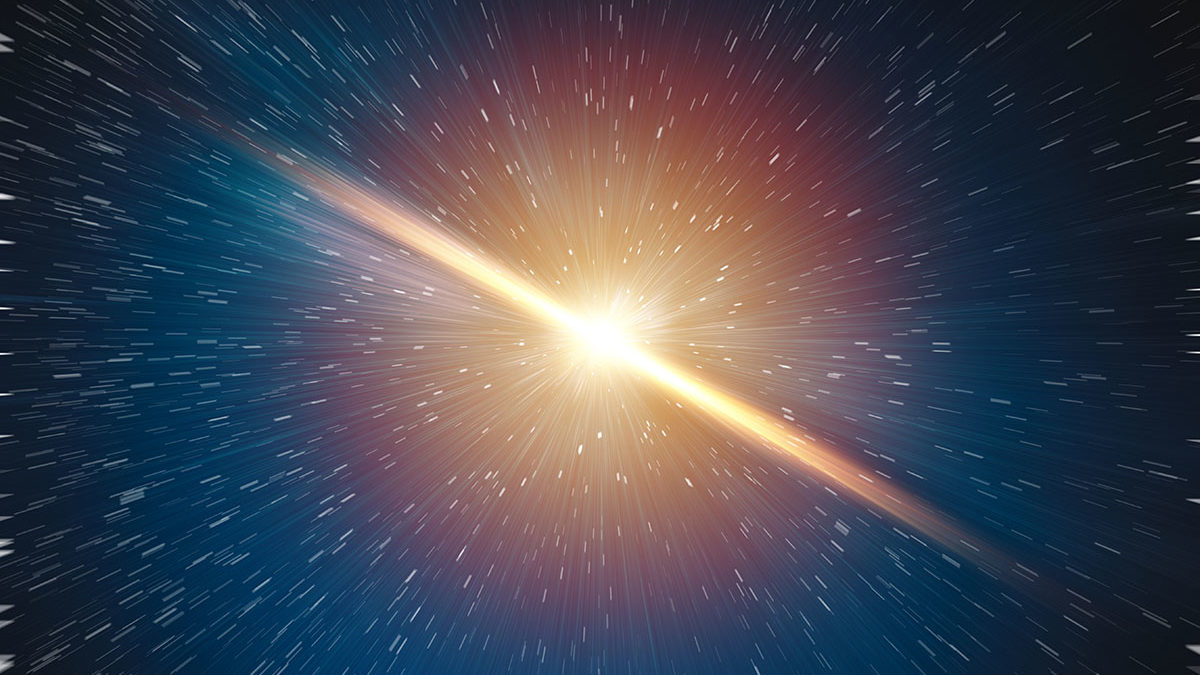 To see why the Big Bang is not an explosion, lets’ assume it was one. Look at the debris of any conventional explosion. The debris are never uniformly scattered. This is because some pieces just happen to get a stronger kick than the others do, and those pieces leave the slower ones behind, causing an in-homogeneous pattern. If this were so with the Big Bang, we should expect the distribution of galaxies to be in homogeneous. However, observations currently seem to show that the Universe at very large scales uniform in organization. In addition, if the Big Bang were an explosion, we should expect to see a correlation between galaxy mass and its velocity. Nothing of such has been observed, as we will see. Thus, we see the explosion picture failing to hold and we will see how the expansion picture solves this.

A very important scientific discovery in the 20th century is that the Universe is expanding. Beginning in 1912, Vesto Slipher measured the spectra of several galaxies, and found that out of 25 galaxies, 21 showed a red shift. Recall that a red shift implies from Doppler Effect that the galaxy is moving away from the point of observation (us here!). Edwin Hubble took a more detailed survey in the 1920s and discovered that nearly all galaxies, except a few close to us, were red shifted. His data also revealed another thing, farther away the galaxy; more was the red shift i.e. faster they were moving. The plot of galaxy’s recession velocity versus distance gave a straight line and it is famously known as the Hubble Diagram.

The Big Bang describes this by the expansion of space. If space is expanding, the distance between any galaxy and us grows, but this does not mean the galaxy itself moves. So then where does the red shift come from? The red shift comes from the reason that as light from these galaxies travels through expanding space, their wavelengths also are stretched. The expanding space scales up all distances in space, including that of the distance between two crests (or troughs) of a light wave. Since the wavelength has increased, we see this as a red shift from that galaxy. Apart from this, galaxies also have a their own velocity called their peculiar velocity. The galaxies close to us have their light travelling for a lesser distance in space and hence, their peculiar velocity could cause a blue shift. The galaxies further away have their photons travelling long enough in expanding space so that their peculiar velocity won’t be able to make the large red shift(due to large travel in expanding space) into a blue shift. Thus, it is important to see that it is the expanding space that causes red shifts, not the actual motion of the galaxies.

Possibly the single biggest clue about our universe ever found could be the CMB.  Arno Penzias and Robert Wilson in the 1960s accidentally discovered this as an irremovable “hiss” they got from their radio antenna. Wherever they pointed the dish, the radiation was picked up, that too with the same intensity. The radiation was isotropic.

A team of scientists had predicted such a radiation, and now it was discovered. This universal glow of radiation, from everywhere in microwave is called the CMB. Further analysis of the CMB revealed that it glows with a temperature of 2.72K and that there are minor anisotropies in the CMB (small fluctuations in the CMB temperature).

The Big Bang explains the CMB as the “glow” from the hot early universe. If we trace back the expansion of the universe, the density and temperature would increase. The calculations revealed that when the universe was about 400,000 years old, the temperature was around 3000K, just “cool” enough to form atoms. Before this, the temperature was so high that protons could not capture an electron in orbit around itself. It would only collide with a high-energy photon and break apart. However, when the universe was 380,000 years old, the temperature was cool enough for the electrons to be in orbit around their protons. This event is called as Recombination. After this, light could now travel freely. The Universe went from being opaque to transparent. This light, which has been travelling since, has expanded in its wavelength, and now it is visible to us as the CMB. Thus, we see how the hot early Universe as described by the big bang explains the CMB.

It turns out; there is a specific composition to the Universe, a particular amount of elements. Scientists can learn the composition of stars, gas clouds etc. from the light we receive from them. The light can be broken into its spectra and this gives an estimate of the abundances of elements. It has been found that up to 74% of the Universe is hydrogen (all isotopes combined) and 24% helium.  This ratio of hydrogen to helium has been observed since the earliest times of the Universe and the ratio must be explained.

The Big Bang theory says that the Universe was hotter and hotter as you go back in time. So then, there should be a point in the past, when the temperature was enough for nuclear fusion to happen everywhere in the Universe. This early period of cosmic fusion, about the first 20 minutes after the Big Bang is called Big Bang Nucleosynthesis (BBN).

Now it is well known that neutrons can turn into protons (plus other particles) and vice versa. During the early universe, the temperature was very high and the hence, there was enough energy to create protons and neutrons. This is because energy and mass are convertible into each other by E=mc2. The neutron is slightly heavier than the proton. Therefore, as the universe expanded and cooled, there was a time after which it was too cool to make neutrons. However, the existing neutrons could decay into protons, which also had been created from the energy. Therefore, even though they might have started in same amounts, after some time there were more protons than neutrons.

It has been calculated that there were about 7 protons for every neutron around. This ratio then determines everything. For two neutrons, there were 14 protons. Both these neutrons and 2 of the 14 protons would be used to make helium. The remaining 12 protons are hydrogen nuclei. That means that one fourth of the particles (4/16 total) were used to make helium. Thus, the result is 25% helium and 75%hydrogen! The observed elemental ratios come up naturally. Though there are many details to the BBN, its success lies in the fact that it can predict accurately the elemental abundances in accordance to the expanding universe picture.

The Big Bang theory is one of the most amazing triumphs in science. A theory that has described the beginning of the Universe, to making amazing predictions of the things we see today. The Big Bang theory, in a way ultimately tries to answer the questions about the nature of reality itself. As the famous astronomer Carl Sagan famously said, “To make an apple pie, you must first invent the universe from scratch”! The Big Bang theory, though far from complete, will be theone of the best theories there is to describe our Universe.

Can we reach each city from every other city when there are one-way roads? : Tarjan’s Algorithm