Behind the Scenes of the NITK MC × Mafia Collab 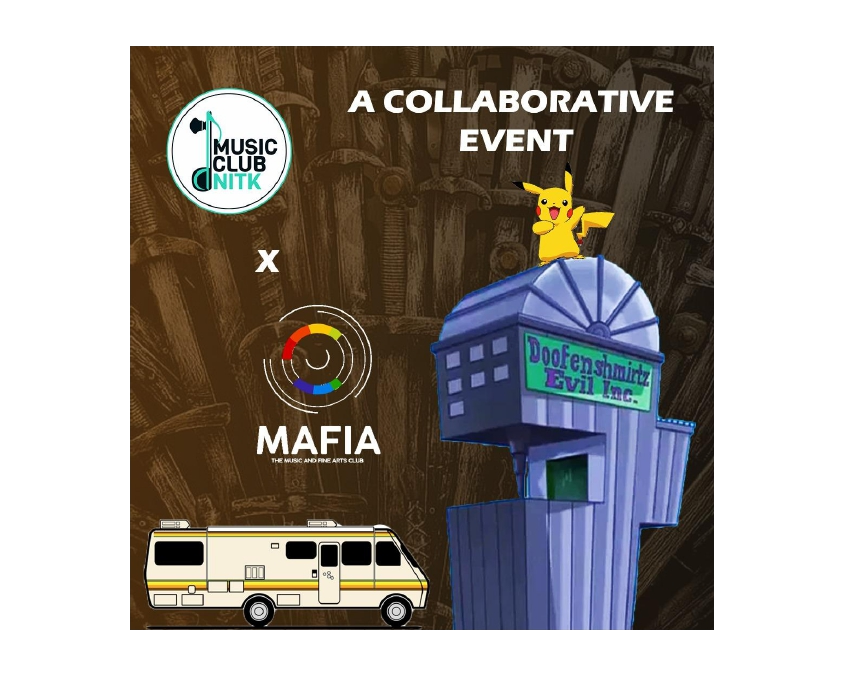 Introduction of the interviewee

Linu Elizabeth George is a final year Information Technology student at NITK. She joined the NITK Music Club in her first year as a western vocalist, and is the vocalist of the band BRIXITI. She is also an amateur guitarist and drummer. Linu served as the treasurer of the Music Club for the academic year 2019-20 and is currently the convenor.

Mafia is the Music and Fine Arts Club of Manipal Institute of Technology. In October 2020, Mafia and NITK MC released a set of 4 TV show theme song covers: Breaking Bad, Game of Thrones, Phineas and Ferb and Pokemon. This interview gives us an insight into what went on behind the scenes of this production.

How did the collaboration with Mafia come about?

Mafia contacted us on our Instagram page and expressed their interest in collaborating with us, and we decided on covering TV show theme songs. Once that base idea was formed, we shifted conversations to whatsapp and set out to plan the remaining process.

How did you go about selecting the 4 songs to cover?

Some core members from the MC and Mafia discussed the specific details of the collaboration. We decided to go with a total of 4 songs, considering our timeframe and availability of artists. Everyone put up a list of the TV show songs they wished to cover and we narrowed it down from there. The idea was to choose something popular enough to attract an audience but unique enough to stand out at the same time. The Pokemon and Phineas and Ferb theme songs were no-brainers. We knew our audience would connect with it immediately given the popularity of these shows, especially with our generation. The Breaking Bad and GOT themes were chosen for a shred off. This gave us a chance to both replicate the original theme and to have our guitarists and keyboardists improvise, or freestyle over the same.

Can you introduce us to the team that worked on this project?

The project was coordinated by core members from both the clubs and each cover involved a mix of artists from both clubs. These were the artists involved on our end.

Breaking Bad – Samarth Katiyar and Sidharth Lanka, on the guitars
Game of Thrones – Samarth Katiyar, Pranav Krishna and Sidharth Lanka on the guitars and Rajamani, on the keyboards. Rajamani also worked on producing the main GOT theme track, over which the instrumentalists improvised.
Phineas and Ferb – Paul Anoop on lead vocals, Shreyaa R on backing vocals, Jeevan SP on the guitar and Prasad Fidelis D’sa on the bass.
Pokemon – Gaurav Hore and Abhishek Kolari on vocals, Dale Dantis on the keys and Rajamani on percussion.

Rajamani worked on mixing and producing the tracks, Anushrutha Tripathi on video editing and finally, Chinmayan on the teaser posts.

What were some of the challenges you faced while working on this?

One of the major problems we faced was the lack of recording equipment. Usually, when we work on productions in college, we have access to the recording studio at the CSD. Given the suddenness and uncertainty of our departure from college, a lot of instrumentalists did not have their instruments with them and that posed another challenge. Until now our posts didn’t require a lot of editing, especially graphics and video, but our team stepped it up. In the end, we sailed past these problems with ease, which is a testament to the efforts from both the clubs. Artists without recording equipment recorded using their phones, and our producers worked on mixing all the tracks together.

Team dynamics play an important role in such endeavours. How did the NITK MC get along with Mafia?

One of the main reasons for the success of this collaboration was the dynamic we shared with Mafia. Both the clubs got along very well from start to finish, since we have similar vibes, which put us at ease and made dividing work very simple. They helped us out when we were busy with our exams and vice versa. It was a complete team effort, and not a one man show. We even had a chill session with the Mafia members once we wrapped up the collab.

As the convenor, how was your experience working on the first big project of the year for the MC?

I had a great experience. I didn’t have the physical work of walking around, just a lot of google meets which is more convenient, a lot of calls and reminding people about deadlines. Everyone was very enthusiastic about the collab, and the rest of the core was actively involved, which made it a whole lot easier for me.

What’s next for the MC? Any upcoming projects?

Yes, we recently released a tribute to the late SP Balasubramaniam, one of the most prominent playback singers in the southern movie industry. We have been working on a new series called Undiscovered Underground, which aims to introduce people to new artists in different genres. A live Music night is also in the talks, so stay tuned to our Instagram page! You can check out our collab with Mafia at the link below, if you haven’t already.

Photojournalism: Through the Adversities - Stay

A Gape into IE’s ‘Treasured Events’ of the Year

In House with the Newly Crowned Cons – Part 8